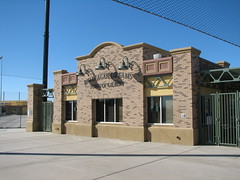 Since the future sports park is located just a couple of miles from my house, I stopped by over the weekend to see if I could take a few photos.

It appears the park is quite near completion as I only spotted a couple of workers there on Saturday. The gates were locked up, but I did manage to jam my burly arms through a couple of places and squeeze off a few photos before one of the workers there ran me off.

Big League Dreams sports parks contain multiple softball fields that are scaled down replicas of major league baseball stadiums. I *think* the Gilbert version includes replicas of Yankee Stadium, Fenway, Ebbett’s Field, Chase One (formerly Bank One Ballpark — home of the Diamondbacks) and more. There are also batting cages, restaurants, and an an indoor arena.

The original projected cost of the sports park was $23 million, but last I heard that had swelled to over $36 million. Located on Elliot road between Higley and Power, the sports park is set to open in early January. The Republic says the grand opening is Jan 12, notices at the park mention tryouts on Jan 9 and play beginning Jan 22. 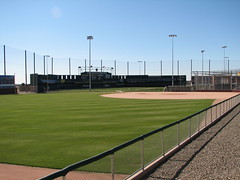 The developers that build and operate Big League Dreams sports parks pitch a plethora of perks a sports park like this can bring a community. Only time will tell if it happens here. I can tell you though — the fields are very nice. We’ll see how that turf holds up in the summer heat…

Fenway Park and Wrigley are among the stadiums that will be featured. Make sure you check it out as we know there are many Red Sox and Cubs fans in the valley.